Guest author Sally McGraw blogs at Already Pretty.  She’s also the daughter of Dan Weinbach, author of Trees 4 Seasons.  She recently interviewed him for this blog. 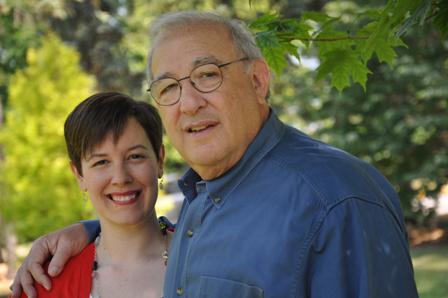 Q: What caused you to pursue landscape architecture as a career?

A: Well, it was actually an accident. I was looking for work after my Peace Corps stint, and I ran into an old professor of mine, George Dickey. He was one of my professors in architecture school who was also a landscape architect. He had a little landscape architecture practice going in St. Louis and he offered to hire me just because he needed somebody.

Q. So you had planned to be a traditional architect, designing buildings?

Q. But George stepped in and steered you in a different direction?

A: I needed a job! So he hired me and we worked for a few months in St. Louis. And then he took a job at Skidmore, Owings, & Merrill in Chicago as head of the landscape group and was charged with setting up a new landscape department there. He offered me a job to come up to Chicago with him. So I learned the profession completely on the fly, by working with George.

Q: Was landscape architecture a fairly new profession at the time, or had it been around as long as traditional, building-related architecture?

Q: What was the inspiration for Trees 4 Seasons?

A: Well, I saw a need for a book like this. I had been dealing with clients and needed to show them the plant material, the trees in particular, that I was using on a project. Trees usually have an important role to play in a landscape project. And the client will inevitably ask, “Well, what kind of trees are we using?” And so I would have to look for visual references on trees, and they were few and far between at that time. There was one book that had black and white photos of a tree in winter, and that same tree in the summer. And it was great, it was the best thing around. But then when I tried to find color pictures or pictures of trees in the various seasons – a comprehensive photographic description of trees – there was nothing like it. .

So I decided to do it. I started by taking photographs all over the place and eventually I decided to put it together. It’s just taken a long time to finish, by the very nature of the book.

Q: What is the basic premise of the book?

On a two page spread, each tree is completely visually described. One one half of the spread, there are portraits of the same tree taken from the same position – hopefully with the same type of lighting – during three or four seasons of the year. (Four seasons for flowering trees, three seasons for shade trees or non-flowering trees.) Then on the facing page, are all the details of the tree: The foliage, the bark, the flowers, the fruit, and the fall color. All of the basic visual components of the tree and a very brief written description that gives you the size of the tree, the zone in which it lives, and a few notes about uses for the tree. So you open the book and on those two facing pages you have a complete, colorful, visual description of the tree.

It’s an extremely simple concept, but to my surprise nobody has ever done it just like this or even close to this.

Q: Why do you think that is?

A: Because it’s so difficult and time-consuming to put together. There are beautiful photographic books on trees, but they’re just photo books. They show one aspect of the tree, maybe beautiful foliage with light coming through. Maybe a ginko tree there’s a focus on the interesting foliage. If it’s a flowering tree, you’ll inevitably see a photo of that tree in full flower even though that phase only lasts for two or three weeks. The rest of the year it doesn’t look like that!

There are also tree identification books which provide pretty good information about foliage and fruit and bark and twigs and buds and that sort of thing. But those are just particular details to use to identify a tree if you’re out in the woods. They don’t show the form of the tree and the seasonal changes of the tree.

Many of the photographs in this book were slides that I took years ago when there was no such thing as digital photography. The slides been digitized for the book. That was a more difficult process, a more expensive process. It’s a lot easier today. In fact, I could’ve probably cut  in half the time it took to create this book if I’d had digital photography all along.

Nobody’s ever done this because it takes a long time and a lot of patience to do it. 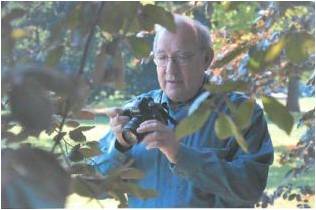 Q: How did you decide which trees to include in the book?

A: If you’re going to describe trees seasonally, there are only certain trees that change with the seasons and they are deciduous trees. They drop their leaves in winter, they display fall color, some have flowers, they change with the seasons. Evergreen trees do not, tropical trees generally do not. So deciduous trees are the most common in this area of the country, the Midwest. But the range of the trees in the Midwest is huge. It goes all the way to Colorado in the west, all the way to the East Coast, and close to the Deep South. Plus parts of Europe and Asia where some of these trees were imported from, so the book is relevant in Europe and Asia, too.

Q: What were some of the locations that you visited to photograph the sample trees in the book?

A: Most of the tree photographs were taken in local arboretums. The Morton Arboretum is a 1,500 acre arboretum here in Chicago, a tremendous place. Chicago Botanic Garden is a large botanic garden. And there were some trees taken in parks. The reason for that is that the trees need a neutral background. Trees photographed in the city or on city streets just don’t work because of the background.

Q: This is your first book, correct?

Q: Would you consider writing another book, perhaps a similar examination of shrubs or other plant life that changes over the seasons?

A: Yes. I would definitely consider deciduous shrubs. That would probably be the next book. Although this book could be expanded to include some other trees that go deeper into the south and perhaps even to include evergreen trees just as another type of reference. Doesn’t fit with the format, but it might be a good idea to include evergreen trees. So another edition of this book might include some additional trees. That would probably come first.

Q: Have you received any feedback on the book?

A: Well, yes. Everybody I talk to loves the book! Most of my friends are associated with the profession in one way or another. They’re architects or architectural renderers or engineers or just people involved with the profession. And they all react very well to it. The Chicago Botanic Garden and the Morton Arboretum also reacted very well. In fact, the Chicago Botanic Garden had their experts review it, and recommended the book.

Q: And it’s available for sale …

A: At the Botanic Garden and the Morton Arboretum. And several bookstores have looked at it, and very quickly said that they like it and think it would be a good seller.

Q: Who is the intended audience of the book?

A: There are a lot of audiences. Obviously, people in the profession. Professional landscape architects, nurserymen, landscape contractors, and even architects who sometimes deal with landscape. Anybody involved with the construction profession, and particularly the landscape profession. But I also see a good market for it in schools, particularly landscape and horticultural schools. And the general public, many of whom are interested in gardening and plants in general, as proven by the huge number of people that visit the botanic gardens and arboretums. They have thousands of visitors every day who are interested in the subject, and so I think there’s a good market for this in the general public as well..

Q: Was there a particular tree or specimen that caused you a lot of trouble as you were putting the book together?

A: I remember one tree. It was a sugar maple that I loved, and it was in a cemetery. I had taken the summer and winter photographs of this tree, and when it came time to take the fall picture I went back and they had pruned the tree dramatically. I was going to use it anyhow in the book, but in the end I substituted a different specimen.

The hardest seasons to photograph were spring and fall because they’re short seasons. You have to have the right lighting, you have to catch the tree at its peak of flowers or peak of fall color, and it’s very difficult to get to that tree at exactly the right time. And if you don’t make it for a particular tree in a particular year, you’ve lost an entire year. And that happened time and time again. That’s why it’s taken 30 years to put this book together.

A: Probably either a sugar maple which has a tremendous fall color and is a big, beautiful, majestic tree or beech trees – American and European beech trees – which are the trees that have very smooth, gray bark that everybody likes to carve their initials in. They’re just the strongest, most majestic trees, the beech and the maple.

Q: Are those two among the trees you use most often in your landscape designs, or do you just like them for their own value and aesthetic?

A: Mostly for their own value and aesthetic. The trees we use in designs are varied. You may pick a tree for its form, but many trees are chosen because they grow fast. When you do a commercial landscape or even a landscape for a homeowner, they don’t want to wait a hundred years for the tree to reach its full glory. So there are some quality trees that grow pretty fast. There are other trees like the beech and ginko that grow very slowly, particularly when they’re young. Most owners – whether they’re commercial or homeowner – just don’t have the patience. So I use them whenever I can, whenever I think I can get away with it.

Buy Trees4Seasons - A Visual Guide with credit card or Paypal below, or by check payable to:

For deliveries outside the US, please email us for shipping cost BEFORE using Paypal.

Return the book within 30 days and we will refund the price of the book.

“I love this book. Its concept is compelling and elegantly realized, and it will reward professionals and lay naturalists alike. We can all use it, enjoy it, learn from it.”

“Trees 4 Seasons is a much needed reference for design professionals, students, and anyone who loves trees. In a simple, elegant format, it celebrates the spectacular pageant of seasonal change that trees bring to our gardens and urban settings.”